In December 2017, Isenberg started as a contributing editor at Providence Media. He writes regular features and news items about the Rhode Island culture and culinary scenes. He helps edit five glossy publications, Providence Monthly, East Side Monthly, The Bay Magazine, SO Rhode Island, and Hey Rhody, which are distributed across the Ocean State. Find a sampling of his articles here.

For two years, Isenberg was based in Phoenix, and wrote about arts, dining, and outdoor sports for The Phoenix New Times, one of the nation’s oldest and respected alternative newsweeklies. He also helped cultivate the website’s multimedia platform, producing nearly a dozen short documentary videos. Find all his articles here.

Isenberg moved to Costa Rica in 2013, where he served as a staff writer for The Tico Times. He contributed regular news stories, profiles, art criticism, videos, and photojournalism. Many of his articles were collected into his latest book, The Green Season. 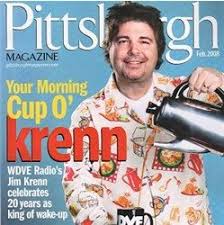 Isenberg served as a contributing editor for Pittsburgh Magazine from 2003–2013. He wrote a monthly column on the Pittsburgh theatre scene and contributes regular features to the Scoop, People, and A&E sections. (Image above of Isenberg’s main cover story, a profile on celebrity DJ Jim Krenn). You can read much of his online content here.

Isenberg covered TV and television culture for MSN.com from 2006–2013, reaching millions of readers with his round-ups, features, and quizzes. His articles have often been featured on the portal’s front page. You can find his archived articles here.

A frequent contributor to E, Isenberg has written a range of articles, from a cover story on Rachel Carson to an Eating Right column about growing your own mushrooms. See all stories here.

Isenberg wrote for City Paper from 2001–2013, contributing news stories, features, profiles and interviews. He was a prolific theatre critic, and his reviews garnered two Golden Quill Awards from the Press Club of Western Pennsylvania. You can read his articles here.

A longstanding interest in peace, progress, and freedom of speech led Isenberg to Sampsonia Way, the editorial wing of City of Asylum Pittsburgh. Check out his interviews here.

Isenberg contributes writing, photo essays, and the weekly “Patch Picks.” He has contributed to the Regent Square and Moon Township editions of Patch.com since 2010. You can read his articles here.

An occasional contributor since 2006, Isenberg has written about neighborhoods, development, arts and culture. You can read his archived articles here.

Isenberg served as a Pittsburgh correspondent for Backstage from 2006-2007, contributing news, reviews, and features to the online version. His specialized theatre coverage has also appeared in Stage Directions, an industry magazine.

Over the years, Isenberg has contributed features to a variety of specialty and in-flight publications, from US Airways and Hemispheres to Foundations alumni magazine and South Pointe Connection. Subjects varied from biking the Great Allegheny Passage to commercial developments and churches converted into brewhouses.

Although Pulp was short-lived, Isenberg became one of the paper’s most prolific freelancers, contributing hundreds of articles and a half-dozen cover stories between 2001 and 2005.

Isenberg hit the ground running in 2000 with his first professional client. InPittsburgh, the first alt-weekly of the Steel City, hired him as an art critic in May. By the September 2001, when the paper was bought out by Steel City Media, he had filed hundreds of art features, theatre reviews, news items, technology reports, travelogues and two cover stories.