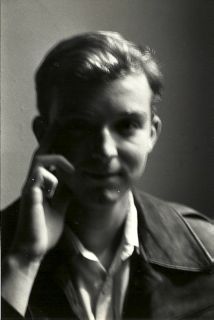 the photograph is slightly out of focus.

In 1999, I published my first article—a sarcastic little essay about “finding oneself.” I sent the piece to The Pitt News, the student newspaper of the University of Pittsburgh. The Pitt News was notable for being (a) a daily paper that (b) paid its contributors. Within days, 10,000 copies of my article hit newsstands around campus. I was nervous and excited, because I had always wanted to become a professional writer, and now it was actually happening: I was getting published.

A few months later, my editor gave me a regular column, called “Postmodern Gush.” The next summer, I became Opinions Editor of The Pitt News.

Since then, I have published thousands of pieces, large and small, for newspapers, magazines, and online publications. When I started out, the Internet Age was dawning. Now, the Print Age is in its twilight. And in the 14 years in-between, I forged my career as a freelance writer, leaping from masthead to masthead, earning my living the best way I knew how.

Here’s the crazy thing: Hundreds of my early articles still exist only on paper. Digital archives were not ubiquitous until the mid-2000s, and some publications—like the late InPittsburgh, or the defunct Pulp—were erased from the Internet the moment their businesses failed. Hundreds of my reviews, features, profiles, interviews and editorials vanished from the World Wide Web (indeed, around the time people stopped calling it the World Wide Web). Of the 300 or so items I wrote for AOL DigitalCity, hardly a scrap remains anywhere. The only evidence that I wrote for these publications is physical—carefully stored in a Rubbermaid crate, deep within my basement.

Starting this month, I have begun to archive these long-lost articles. I would like robertisenberg.net to be more than a multimedia résumé; I would like to compile the full canon of my writing career. This requires some marathon typing sessions (most of the hard copies have to be re-transcribed by keyboard), but the project grants me an excuse to revisit old stories. Some make me cringe, since I am older and wiser, but most inspire fond recollection, because I can remember what it felt like to write them.

I plan to republish these items in roughly chronological order. In a way, I am piecing together a mosaic of my early life—a vast autobiography told one article at a time. While my op-eds gradually transformed into art reviews, then theatre reviews, then profiles and travel stories, nothing could be more revealing than these early articles. As I often say, writing is my life. No matter how removed or exotic my subject, the actual sentences are honest and transparent. They document not only what I was doing at the turn of the millennium, but what I thought, whom I met, and the ideas and feelings I juggled. Folks say that journalism is the first draft of history. At the time, I had little notion I was drafting my own.