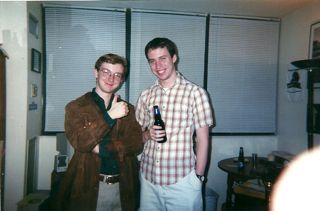 The following appeared in The Pitt News, 1999.

Photograph of me and my Pitt News editor, Dave Madden.

And that is, in fact, the jacket I purchased.

My trench coat was a veteran of four bitter winters and was so heavily stained with street grime that restaurant hosts would hesitate to seat me. Splotches of dried ketchup and streaks of bicycle grease clung to an already gloomy piece of attire, but I defiantly excused these as pronouncements of character.

But the elements finally won their battle, and my coat longed for retirement. At this point, it was hardly a trench coat at all, but rather an outstretched parka. The insulating fabric was so torn that I snipped it out with scissors. Most of its buttons were missing in action. Former pockets were vacuous pits that sent change dribbling into uncharted nether-regions. Thus I decommissioned my loyal accomplice, and now it rests on a shelf at Goodwill.

This left me with two choices: I could find an exact replica of this trusty warhorse—knowing it would never desert me, never fail, and dedicate its existence to keeping me warm and dry—or I could try a new style. I chose the latter.

I started at the mall, where I faced cold disillusionment: I’m not the demographic posh men’s stores go for. The floor-to-ceiling portraits of pumped Italian-Americans with their pensive frowns and devilish good looks reminded me of a lot of guys I know, myself not among them. I studied the racks, looking for something simple but functional. Instead, I found a salesman.

“What sort of coat are you looking for?”

“Simple but functional. Sleeves are a plus.”

It dawned on me that this was not a matter of finding a coat. I was searching for a new identity. Freud had weaseled his way into my life, clucking his tongue and reminding me that no choice is made without some psychological backstory.

Very well, I new identity. But what kind? A trench coat had served my image nicely, and I couldn’t dishonor the noir look of my past. I needed something that matched all the connotations of a trench coat: grit, industrialism, retro-Bogart glory.

But Tela Ropa didn’t provide it. Counterculture they had in spades, but warhorses stomped other grounds. I tried to picture myself in a jean jacket, a bomber jacket, a really heavy Windbreaker—hell, maybe I could try to reintroduce Paleolithic animal skins to the fashion world.

I tried working backward. Sports jackets were out; it seemed hypocritical to show off a Steelers logo when I had never seen a game. And while suits and blue blazers tend to flatter my demeanor, ties and three-pieces look hopelessly out of place in Oakland. Nor could I chance an ulster or a chesterfield ever since they made those accursed Jane Austen movies. And I couldn’t bring myself to advance the slaughter of minks or rabbits. Fur doesn’t do a thing for me, anyway.

I even flipped through catalogs. It was like a photographic study in high-school cliques: The men in Harvard sweaters sipped tea on Page 3, while the gun-toting hunters trampled through brittle grass on Page 35.

Clothes weren’t just defining my identity; they were choosing my friends for me. A leather jacket would send me bikers. A plaid suit would mean golf carts and old men. For all I knew, a mackintosh would make me the head of the Trench Coat Mafia.

Price was also a factor: I could buy a Western-style raincoat from Kaufmann’s for $300, or buy it used—fresh off the back of a cowboy—for an eighth of the price. The Operatunity Chop nearly won me over with a soft blue trench coat costing only $30. But I have no clothes to go with blue, so my crusade marched on.

At last, I dropped in on Crimes of Fashion, a tiny shop on Forbes Avenue. It conserves space like no other store I’ve seen, jamming shirts and blouses together with a naval compactness. And there, hidden among leather jackets James Dean would be proud to wear, hung my future coat: a long suede piece from the 70s, with belt, buttons and that deep maple brown that blends in anywhere in Pittsburgh.

So began my days as the New Me, which, after all this heartache, is basically the same as the old me, minus the ketchup stains.

One thought on “Searching for a New Look”