When you have more than 14,000 restaurants in 116 countries, you must accept a difficult truth: not everybody eats the same thing. Some abhor beef, others abstain from bacon, and some would even forfeit the bun. McDonald’s may sling Big Macs everywhere, but they also have to appeal to local taste buds and traditions.

There’s nothing more gringo than fast food, but tourists often find U.S. chains in Costa Rica a little odd. Many familiar joints like Pizza Hut and Burger King are gigantic and immaculately clean; the décor can be downright Space Age. The service is frequently fast and professional (read: less eye rolling from high school dropouts). Meanwhile, the menus may include some local flavor—or, you know, a global corporation’s idea of local flavor.

Thanks to the controversial Dominican Republic-Central America Free Trade Agreement (DR-CAFTA), fast food exploded in Costa Rica in recent years. (McDonald’s alone has over 50 restaurants in the country, from San José to Liberia). How do you translate U.S. junk food for local palates? Here are some attempts: 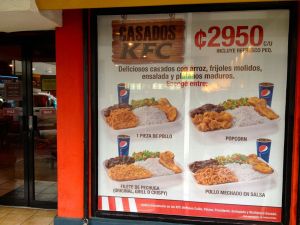 It seems that someone at Yum! Brands discovered casado—Costa Rica’s signature mix of greens, gallo pinto, and a meaty entrée. Over at KFC (née Kentucky Fried Chicken), you can find a hospital-tray version of casado, complete with plantains. You would think a Southern Colonel would conjure bad memories in Central America, but that doesn’t stop his statue from relaxing on Paseo Colón. 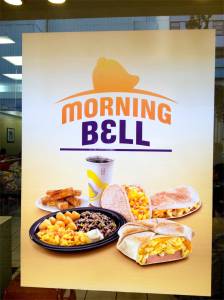 The sad truth is that most norteamericanos can’t tell the difference between Mexico and the rest of Latin America, and even culturally sensitive gringos may assume Tico cuisine means tacos and fajitas. Tex-Mex giant Taco Bell makes a halfhearted effort with its gallo pinto breakfast. 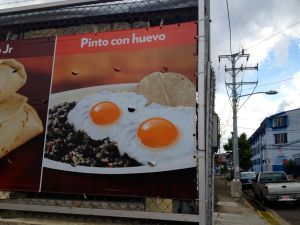 The McDonald’s breakfast is remarkably thought-out: you can find two fried eggs, gallo pinto and a pair of tortillas in almost any soda in Costa Rica, roughly like the one pictured. Making such a breakfast isn’t rocket science, but it’s about as authentic as a fast-food colossus can get. Not surprisingly, the Burger King version is practically identical. Missing: fruit picked from a neighbor’s mango tree. 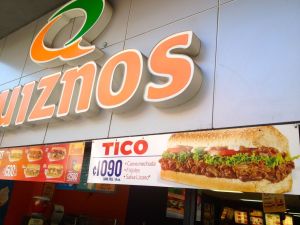 You will have to decide how you feel about the “Tico.” On the one hand, Quiznos has included two Costa Rican staples, beans and Salsa Lizano. Carnivores will love the shredded beef and outlandishly low price. On the other hand, if a foreign company showed up in Oklahoma, threw some BBQ sauce on some meat and called it “The Oakie,” would locals love it? Discuss.